In the year 1877, in the freshly built Franciscan Bazaar György Holzwarth leased a restaurant and appointed – wisely – Károly Csalányi as manager. The restaurant quickly became popular with Budapest citizens, often the line of those waiting for a table stretched as far as the Franciscan church. The famous restaurateur dynasty, the Spolarich family bought the place in 1925 and transformed it into its present, atmospheric and unique state with the help of celebrated artists of the day.

The rebuilding of the rooms began in 1926 according to the plans of Károly Bodon, with the inner salons decorated in romantic style, complete with paintings depicting battle scenes and events of the heroic Hungarian history. The walls are handpainted, with gilded decoration and arches reminiscent of gothic times. All of the works of art are masterpieces by Hungarian artists: including paintings by Lajos Pándy and Károly Reischl, as well as sculptures by Henrik Kollátor.

In 1934 László Károlyi leased the restaurant, gathered a wide range of recipes and changed its name to Kárpátia.
Kárpátia became state property in 1949 and part of HungarHotels chain in 1957. By proposal of the Museum of Gastronomy and the Museum of Applied Arts the Minister of culture declared the interior decoration and furniture a National Heritage. The  restaurant was renovated in 1979. In the year 1997, Dr. Ákos Niklai purchased the restaurant.

His broad management experience, including management of the Forum Hotel, The Restaurant Gundel and Alabárdos as well as 9 years in Australia and the United States, is channelled into his vision of making the present reputation of Kárpátia as grand as its past history. 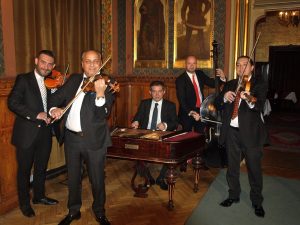 Kárpátia has a truly remarkable atmosphere – the harmony of the beautiful interior with its hand-painted and gilded walls, historical paintings (all created in the 1920’s) and the fiery and emotional gypsy music (played by Lajos Sárközi and his orchestra) is unforgettable. Add to this the professional, attentive service and the specialties of the traditional and contemporary Hungarian cuisine, escorted by the finest wines of Hungary – this is the Kárpátia experience.

The capacity of the restaurant is 260 seats including four separate rooms. These salons offer a special environment and atmosphere for celebrating family events, organizing elegant business meetings, conferences, cocktail parties or press conferences. In the summertime the terrace offers outdoor seating for up to 150 guests 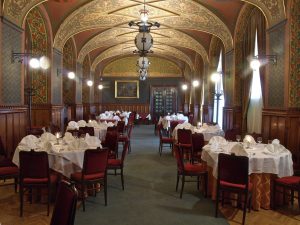 Banquett seating: max. 80 pax
(6-8 pax at one table)
Music room can have two side rooms, the
maximum capacity is 140 pax (with 6-8 pax
at one table). These rooms can be separated
as private rooms. 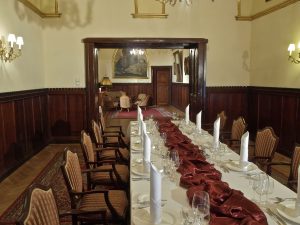 Kárpátia Party Service
The staff of Kárpátia is ready to take the quality and service that guests are used to in
the restaurant to any palace, museum or any place that the customer may desire in and
around Budapest. The Kárpátia Party Service is happy to help with the organization of
parties and events – finding locations, designing décor, flower arrangements, providing
amplification, lighting, hiring hostesses, designing and mailing invitations